The name debate: ‘noodles, or woggles?’

Pool noodles are a versatile, instantly recognizable flotation aid. They are often used to help swimmers gain confidence in the water, learn to swim, and after their skills have been built, quickly transition into limitless play toys in (and out of) the water.  There is a slight contention with the name; some referring to the long thing polyfoam toys as ‘noodles’, and others as ‘woggles.’ We tend to brand ours as ‘noodles,’  but we wanted to explore the history behind the name debate.

This stems back to a degree of anonymity regarding who first came up with the idea. Both Steve Harman, and Richard Koster both claim to be the creator, but it’s hard to to trace, as neither of them patented the idea.  Harman said he created the pool noodle with Industrial Thermo Polymers, who made backer rods used in expansion joints in industrial construction, and roadways. He named his product the ‘fun noodle.’

Koster, on the other hand, claims that he was inspired by his children who were competitive swimmers, to experiment with floating toys.  He had done various concepts for flotation devices, but eventually settled on the ‘water woggle; which originally featured a stripey pattern, and a foam head, designed to look like a serpent, but this was quickly scrapped; sticking to the singular colour and a straight float.

The two entrepreneur did work together for a short time, but split due to differing opinions regarding the noodle / woggle.

Lots of different companies now make, and sell the long cylindrical flotation toys worldwide as one of the most popular pool play toys, and there are also several uses for pool noodles outside of the pool (in the spirit of the star wars trailer being released recently; check out how to make pool noodle lightsabers!)

Buy yours today at www.theswimmingshop.com, or buy a box of pool noodles for multi-buy savings! 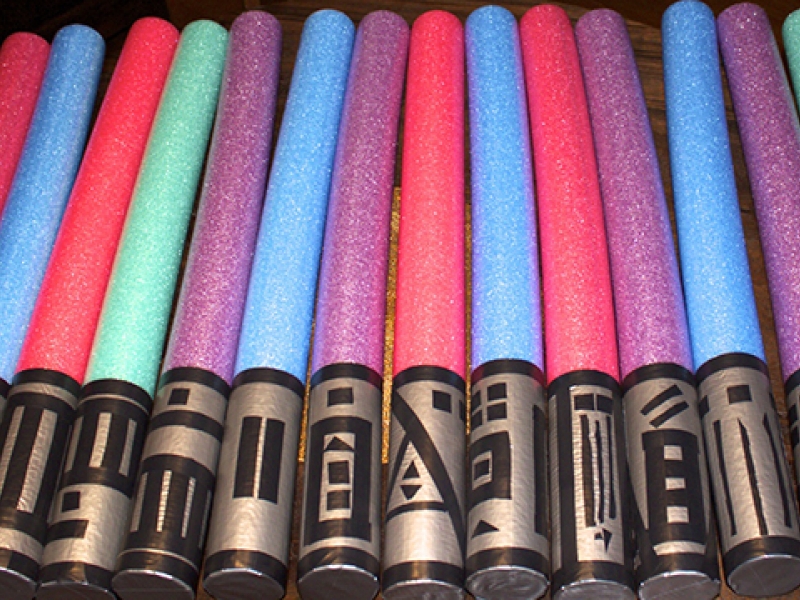